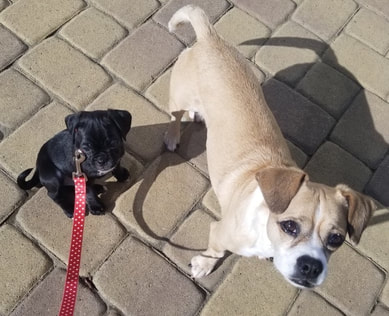 These two are just the cutest little pups! Poppy was recently adopted and Scout can be guarded (and snippy). Because Poppy is so young (10 weeks), her fast and random movements are stressful for Scout. Scout will snap when he doesn’t like something so we need to be careful and aware of this by paying attention to his body language and behavior. We also need to respect that this is how Scout feels – we will not punish him because he could start to resent Poppy even more if we do. Punishing dogs for their feelings is dangerous, we need to help them feel more relaxed, not more stressed. We want them to look to us for support, rather than suppress their feelings and appease us.

To help Scout become better acclimated to Poppy, we started by having Poppy inside of a pen and we rewarded Scout for:


After this work we moved outside with both dogs on leash. This gives them both a chance to be together but reduces the risk of Poppy “rushing” Scout. I encouraged the family to continue this and they even tried it with Scout off of the leash and it went well. Scout needs to be watched carefully because his is larger than Poppy and tends to snap. I also recommended they consider muzzle training Scout so that they can ensure safe interactions without a leash being part of the equation. With continued rewarding to Scout when Poppy is around, he will begin to enjoy her presence. It is not safe to leave them unattended at this time as Scout can still snap when he’s had too much or Poppy moves in too quickly. He will need more exposure to Poppy and her movements but I believe they will be a happy pair with some more work.

For potty training. Poppy prefers to go indoors more than outdoors. Her humans have been using potty pads indoors. I suggested if they want to start training Poppy to go potty outdoors to bring a potty pad with them and place it in the area of the yard they would most like her to go. They can cut the potty pad smaller and smaller as they progress until they no longer need it.

Here are a few videos from the session:
​